For the regular cyclist that wants to discover more of Puglia and doesn’t mind some steeper and varying terrain. These tours offer between 6 and 9 days of cycling with a maximum of 60km a day.

Guided Tour of Puglia from Matera to Lecce

A guided Apulia bike tour to discover the most beautiful and unspoiled corners of Puglia Italy
You don’t have to take care of anything except pedal along the most beautiful bike routes of our region. Our guides will be looking after you at any time, thanks to their experience, professionalism and knowledge of the area. The tour starts in Matera, the famous UNESCO city of the “Sassi” (“Stones”, i.e. the old town full of cave dwellings) and future European Capital of Culture for 2019.
This 12-day/11-night cycling holiday is the best option to know Puglia far and wide, starting from its beating heart, the country of the trulli (the conic-roofed rural houses) and the masserie (local fortified farmhouses). To top off the tour, you will ride on the flat back roads of Salento, staring at one of the most beautiful coasts in Italy.

At the end of the journey, Puglia will have no secret for you anymore – or at least a few kept for your next tour!

Do you prefer an 9-day guided tour? 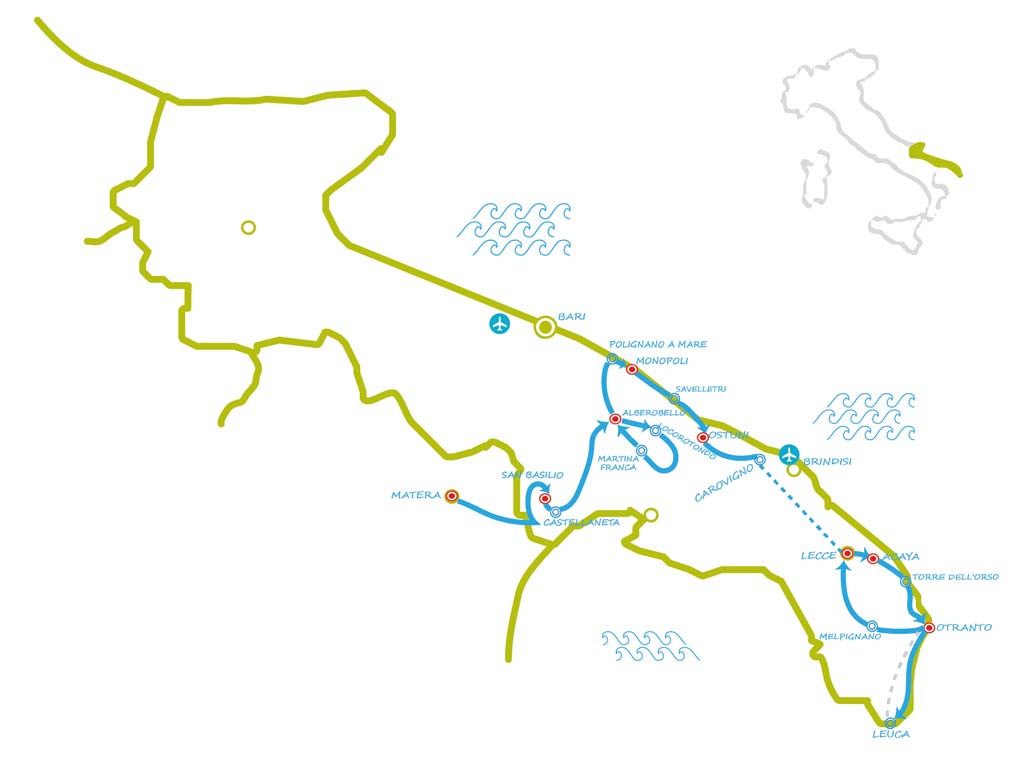 Arrival in Matera and check-in.

Briefing and bike fit with a member of Puglia Cycle Tours crew.

The first stage runs almost entirely in the Ravines Regional Park, in the middle of wheat fields and wide panoramas. You will have the chance to visit the town of Laterza, famous for the tasty bakery products and the beautiful pottery. Enjoy your stay in San Basilio hamlet, in a noble mansion of the XIX cent.

You still cycle the first kilometres in the “Terra delle Gravine” ( Ravines Land), amongst deep canyons, carved by rivers over millions of years. You will even cycle upon one of them, over a stone bridge! Leaving the ravines it’s time to discover the iconic Puglia scenery: dry stone walls, old masserie (fortified stansteads) and trulli, our typical rural houses with a conic roof, built without any cement or mortar. To reach Alberobello, the UNESCO capital of the Trulli, the daily destination, you cycle in a beautiful countryside and through Noci, as well: this town is like a temple of good food – good to know in case you get hungry along the way!

It’s time to say goodbye to the lovely Alberobello and its trulli! You slowly ride down to the Adriatic coast and reach one of its most fascinating town: Polignano a Mare, perched on the side of a cliff; explore the old town and reach one of the terraces, with their stunning view overlooking the sea. Riding further on the coast, you get to Monopoli, a perfect mix between beautiful sea and history. Your accommodation is in the old town, a few steps away from the old fishermen port and the Castle.

Your today cycle starts through the courtyards and arches of the old town of Monopoli, then continues along shores and little coves, arriving in a marvelous scenario: an expanse full of century and thousand-year old olive trees. Little by little, you will spot a white outline amid the hills: it is Ostuni, known as “the white town” because of its whitewashed houses and walls. To perfectly end the day, indulge a stroll in its old town, a sort of Mediterranean Kasbah of narrow alleys and white stairs, getting lost in the light of sunset.

After a short ride by train from Carovigno station, you will reach Lecce, take some time to explore the town before starting your ride again. From Lecce, you cycle in the most authentic countryside, passing through the fortified village of Acaya, dry stone walls and imposing “pajare” (Salento typical “trulli” with a square base) , until you reach the “masseria” (fortified farmhouse) where you will stay for the night.

It’s time to explore the most impressive part of the Salento area: centuries-old olive trees, the “Grotta della Poesia” (Cave of the Poetry), ranked among the 10 most spectacular natural pools in the world, impressive cliffs overlooking the sea, blue jewels which are the Alimini Lakes, and finally Otranto.  This town will enchant you, thanks to the scents of the Mediterranean Sea, its unique history, the feeling of a past which is not vanished yet. You will understand why it is listed in the UNESCO Cultural Heritage!

Leaving the famous Castle of Otranto behind you, you cycle following the coast southwards for more than 40 km. Let’s head to Leuca now, the “finibus terrae”, since it is the southernmost spot of the Italian mainland where the Adriatic and the Ionian sea meet and their currents cross. You will enjoy the view of the deep blue sea, breath-taking panoramas, tiny fishing villages and quaint tourist towns. You will top off this unforgettable day with the final stop in the square of the Leuca shrine, like the pilgrims on the Via Francigena.

This last stage is a postcard to say goodbye, but moreover a see you soon, to Puglia!  From Otranto following the Idro Valley to discover Salento hinterland, where you will often come across some ancient megalithic monuments, the menhirs. Then you cycle along enchanting countryside lanes heading to the “Grecìa Salentina“, where you can still hear ancient greek influences. Lecce, with its elegant baroque old town, will be waiting for you at the end of the trip.

Actual accommodation could based on availability

This kind of tour is thought for those who love pedaling in a group and discovering Puglia in the company of expert local guides.
Every guided tour includes select 4* and 5* hotels; a cycling guide throughout the tour; the luggage transport from hotel to hotel; dinners and tastings as scheduled in the programme. All you have to do is choose a departure date among those we offer and, once in Puglia, start to pedal!

Our guided cycling tours tell about Puglia in every way – in the altimetry, too! Puglia is a hilly region surrounded by the sea: that’s what you will find stage by stage. Some of these stages are almost completely flat; others are funny up-and-down paths; some have short climbs and sprints, which will bring out the cyclist inside you, if even only for some hundred metres.

The average daily path is between about 40 and 50 kilometres. One stage is even shorter (around 30 km) and only one around 60 km.

Matera is easily connected with Bari airport. A metro and several shuttles (but also trains, taxi and hire cabs) let you get to Bari central train station in a few minutes. Here you can take one of the many daily trains of the Ferrovie Appulo Lucane, (F.A.L.) to Matera. The same is the case for Bari port, situated a few steps away from the Central Station.
Matera is also 140 km far from Brindisi, where you can find both an airport and a port with several international routes, too.
If you are travelling by car, take the Bologna-Taranto highway until you get to the exit “Bari Nord”. Keep driving to the “zona industriale” (industrial area) and then to Altamura-Matera, i.e. SS96 and then SS99.
Anyway, a private transfer service with driver from all Apulian airports, stations and ports is also available on request.

Fill out the following form to BOOK Puglia Guided Bike Tour – 12 days.
This will be followed by an email confirming your booking.