For the regular cyclist that wants to discover more of Puglia and doesn’t mind some steeper and varying terrain. These tours offer between 6 and 9 days of cycling with a maximum of 60km a day.

Bike Tour of Puglia from Matera to Lecce

A bike tour to “get the whole picture” of Puglia – starting from its borders with neighbouring region Basilicata. You will start in Matera, the city of “Sassi” and UNESCO world heritage cite, and through the local canyons, the “gravine”, you will enter Puglia to discover, one pedal stroke after the other, its changing landscapes that flow from one beauty into the next. From Murgia to Salento: architectural and natural wonders, sites of immense historical and cultural interest, and of course, unsurpassable culinary specialties! 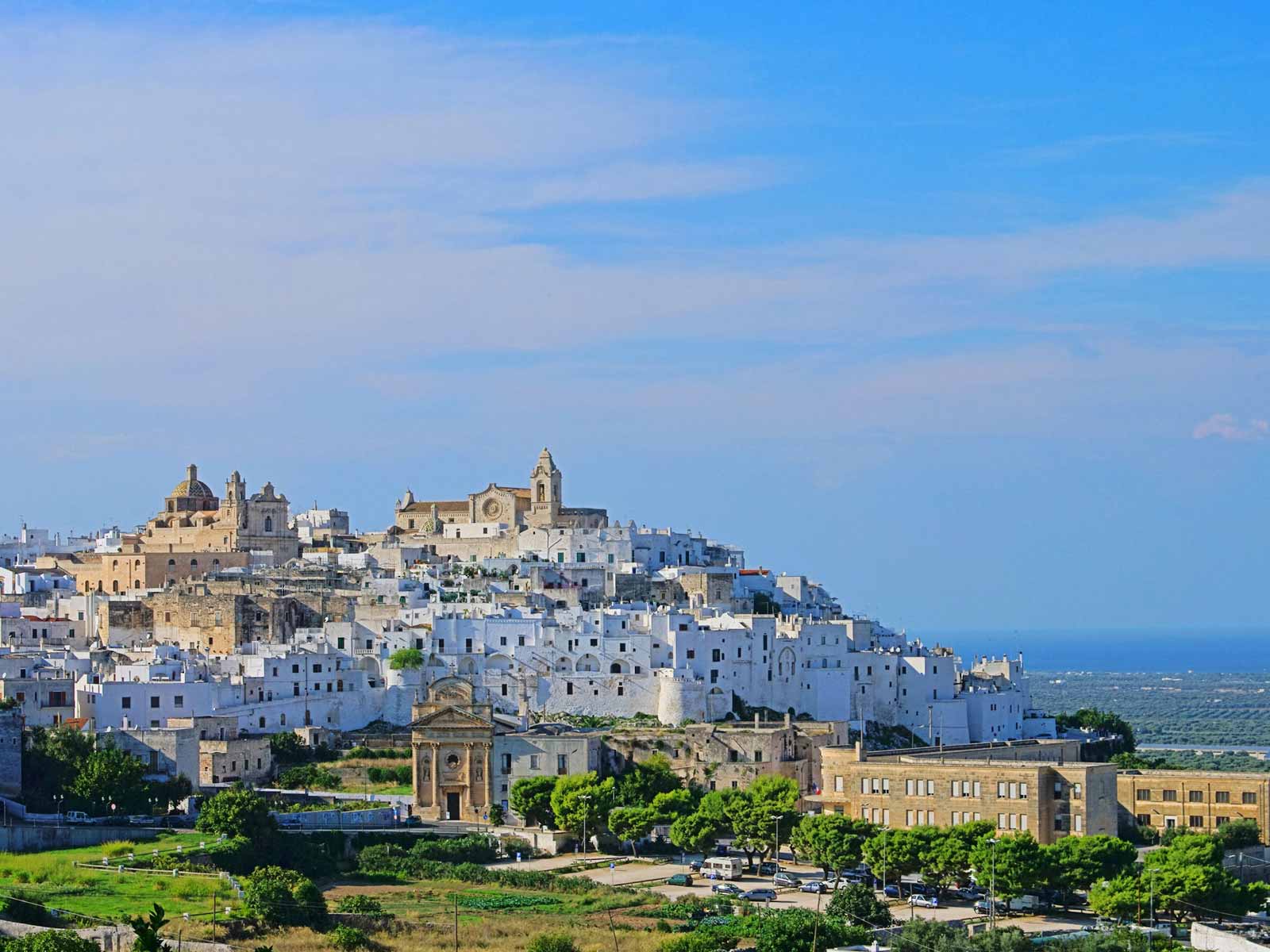 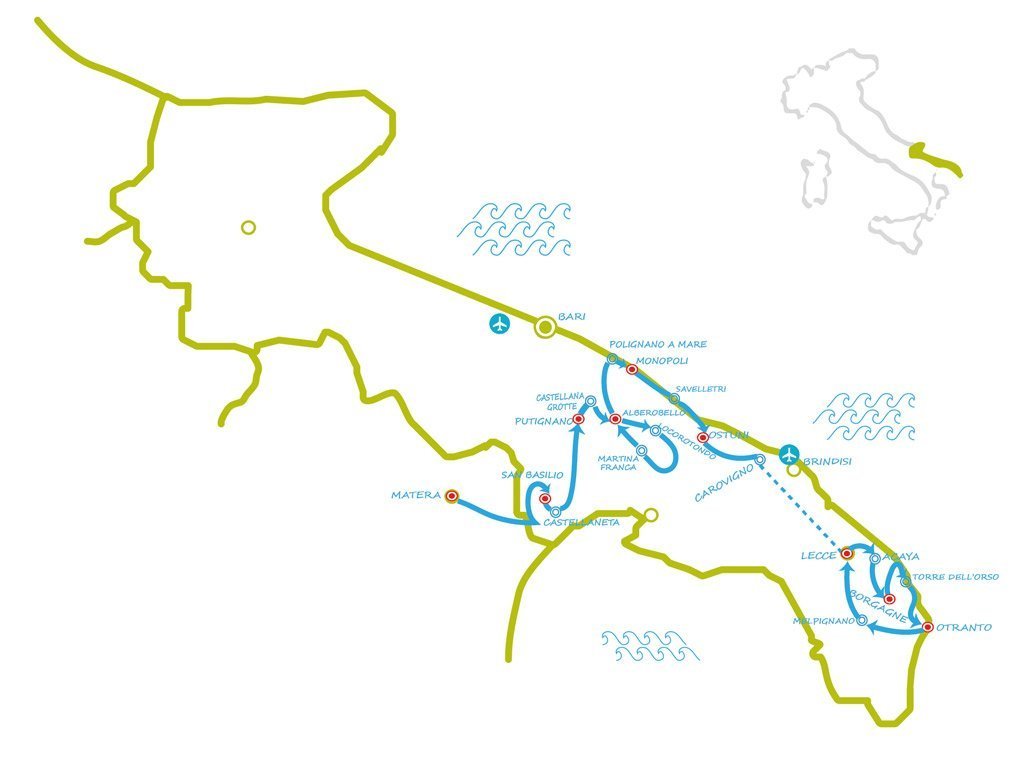 Arrival in Matera and check-in. Take a day off to discover this unique town, Unesco World Heritage and European Culture capital of 2019. You will be caught by its thousand-year old history, the “Sassi” district and cave churches, and its famous bread!

Welcome briefing and bike fit with a member of Puglia Cycle Tours crew.

The first stage runs almost entirely in the Ravines Regional Park, in the middle of wheat fields and wide panoramas. You will have the chance to visit the town of Laterza, famous for the tasty bakery products and the beautiful pottery. Enjoy your stay in San Basilio hamlet, in a noble mansion of the XIX cent.

You still cycle the first kilometres in the “Terra delle Gravine” ( Ravines Land), amongst deep canyons, carved by rivers over millions of years. You will even cycle upon one of them, over a stone bridge! Leaving the ravines it’s time to discover the iconic Puglia scenery: dry stone walls, old masserie (fortified stansteads) and trulli, our typical rural houses with a conic roof, built without any cement or mortar. Your daily destination is Putignano, famous for hosting European oldest carnival.

Leaving the medieval centre of Putignano, cycle in the lush countryside to reach Castellana Caves after just a few kilometres. It is the main karst site in the South Italy: we do recommend to stop for a visit! After the caves, continue along the rolling lanes of the countryside where olive, almond, apricot and cherry trees grow, in their marvelous colours according to the season. The daily destination is a UNESCO heritage site: Alberobello, the world capital of Trulli.

Putignano, the town of the Carnival – Castellana Caves – Trulli of Alberobello

Let’s play a game: are you able to cover even a single stretch of the daily route without spotting a trullo? They are everywhere in the Itria Valley, the very heart of our region. Cycle along the Apulian Aqueduct cycling route, the “Ciclovia dell’Acquedotto”, towards Locorotondo, one of the “borghi più belli d’Italia” (most beautiful villages of Italy). Then before riding back to Alberobello, pass by the quaint town of Martina Franca, known for its baroque architecture

It’s time to say goodbye to the lovely Alberobello and its trulli! You slowly ride down to the Adriatic coast and reach one of its most fascinating town: Polignano a Mare, perched on the side of a cliff; explore the old town and reach one of the terraces, with their stunning view overlookig the sea. Riding further on the coast, you get to Monopoli, a perfect mix between beautiful sea and history. Your accommodation is in the old town, a few steps away from the old fishermen port and the Castle.

Breakfast, and end of services.

We have selected for you the best typical guest houses or 4-star hotels (depending on availability), bike-friendly accommodations in Puglia, equipped with all the comforts a bicycle traveller may need.

[actual accommodation could vary based on availability]

On request and upon availability we can offer 5-star accommodation options, too.

The average daily path is between about 40 and 50 kilometres. One stage is even shorter (around 30 km) and only one around 60 km.

Matera is easily connected with Bari airport. A metro and several shuttles (but also trains, taxi and hire cabs) let you get to Bari central train station in a few minutes. Here you can take one of the many daily trains of the Ferrovie Appulo Lucane, (F.A.L.) to Matera. The same is the case for Bari port, situated a few steps away from the Central Station.
Matera is also 140 km far from Brindisi, where you can find both an airport and a port with several international routes, too.
If you are travelling by car, take the Bologna-Taranto highway until you get to the exit “Bari Nord”. Keep driving to the “zona industriale” (industrial area) and then to Altamura-Matera, i.e. SS96 and then SS99.
Anyway, a private transfer service with driver from all Apulian airports, stations and ports is also available on request.

FULL assistance
Customers have one of our assistants at their disposal 24 hours a day, in case of any problem or need.
In the event of a bicycle failure, he/ she will sort the problem out or suggest how to.
On the day of arrival, the guests meet our assistant for a welcome briefing and bike fit, during which he supplies them with the equipment (maps, GPS device, etc.), giving useful information about the route and the working of the GPS.

Fill out the following form to BOOK Giro di Puglia 12 days | Matera – Lecce.
This will be followed by an email confirming your booking.