For those looking for relaxed cycling, ideal for beginners or those who haven’t ridden their bike in a while and prefer plenty of time to go at their own pace and explore the destination. Only 3 days of cycling on mostly flat terrain is a perfect way to give cycling holidays a try and start discovering Puglia.

A bike tour for everyone: easy and spectacular, along the southernmost stretch of the Adriatic Cycle Route, along the coastline between Bari and Brindisi, with incursions into the countryside dominated by the sea of ancient olive trees and the white city, Ostuni, perched on its gentle hill. You will have no trouble getting to the initial stage of the tour by plane, train or ship – the only problem will be to be able to leave, but not for lack of means of transport! 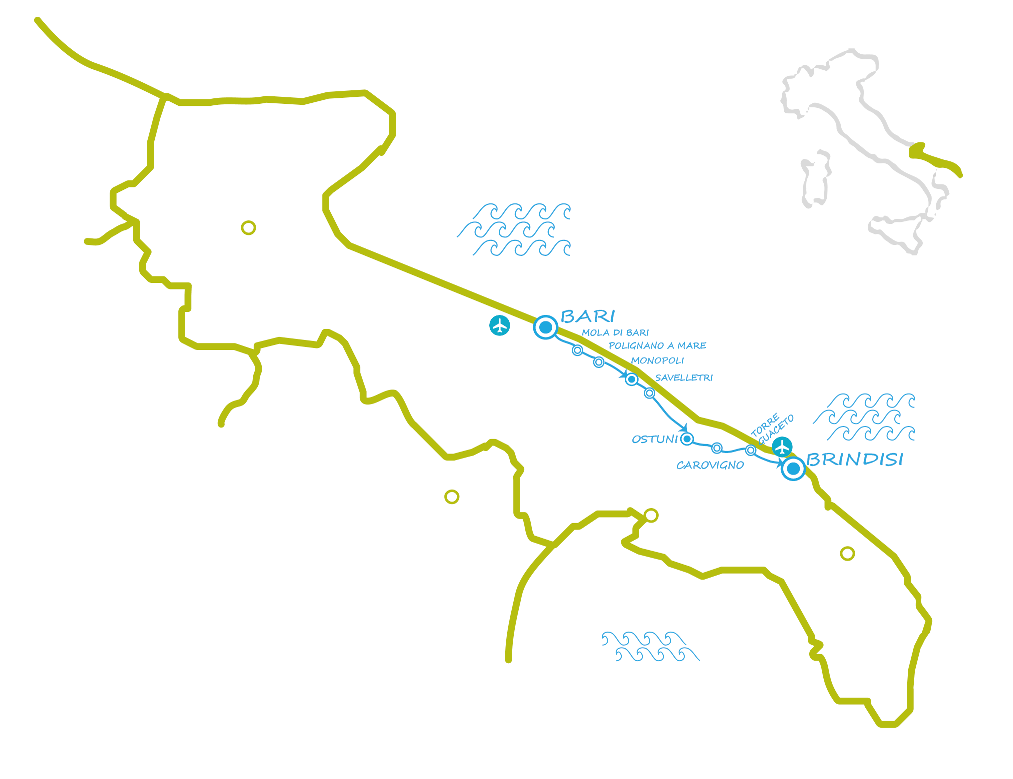 Arrival and accommodation in Bari.

The starting point is Bari, Puglia’s capital and bridge between East and West of the Mediterranean. You will ride in the old town and you will pedal a step away from the sea all the time: first to reach Mola di Bari, the imposing Abbey of San Vito; and then you’ll finally enter Polignano a Mare, one of the most charming towns you will come across on the Adriatic Cycle Route. A few kilometres more between the deep blue sea and the green olive trees and you will get to Monopoli, final stop of the first stage.

You will have the chance to admire the labyrinthine old town of Ostuni, after that, you will ride back to the coast after a short stop in the amazing courtyard of the “Dentice di Frasso” castle in Carovigno. Here you will ride on roads surrounded by imposing olive trees, which will become fewer and farther between when you will get to the State Natural Reserve of Torre Guaceto, a location with an extraordinarily beautiful landscape. From Torre Guaceto you will ride the last kilometres to get to Brindisi and end your cycling tour.

*July and August on request

Helmet is always included in the bike rental.

We have selected for you the best typical guest houses or 4-star hotels (depending on availability), bike-friendly accommodations equipped with all the comforts a bicycle traveller may need. Here are the typologies:

On request and upon availability we can offer 5-star accommodations, too.

This is a self-guided tour, i.e. you are free to ride at your own pace. We will book your hotel, we will provide assistance and the Garmin GPS Edge Touring navigators with which you will be able to follow the path that we have planned for you.

The route is almost totally level, except for a short uphill ride to get to Ostuni. The stages are between 40 and 50 km long. The tour has no particular difficulty and is suitable for anyone who is relatively used to cycling.

There are many low-cost flights to get to Puglia landing in Bari. A metro and several shuttles (but also trains, taxi and hire cabs) let you get to Bari central train station in a few minutes.
Anyway, a private transfer service with driver from all Apulian airports, stations and ports is also available on request.

On-line Assistance
We provide customers with a 24-hours-a-day active telephone number. According to the problem, the assistant shows by phone the closest bicycle repair shop or suggest how to get to the hotel as easily as possible. He can intervene to personally assist the clients only in exceptional cases. On the day of arrival, there is a meeting to explain route features to the clients and supply them with the equipment (maps, GPS device, etc.). The briefing is set up to show how the GPS device works too.

Fill out the following form to BOOK Adriatic Cycle Route – 5 days Cycle Tour.
This will be followed by an email confirming your booking.