For those looking for an easy-going route, mainly on flat with some undulations and the odd challenge, perfect for the occasional riders. Slightly longer tours, between 4 and 6 days of cycling, require a decent level of fitness.

Alberobello, UNESCO world heritage site and world capital of trulli, will kick off your cycling holiday in the heart of Puglia. An easy and pleasant tour, between the Adriatic coast and the Apulian hills, from quiet villages out of time and green countryside and through traditional foods and delicious wines. You will pedal to the south, all the way down to Lecce, to discover its world famous baroque historic centre. 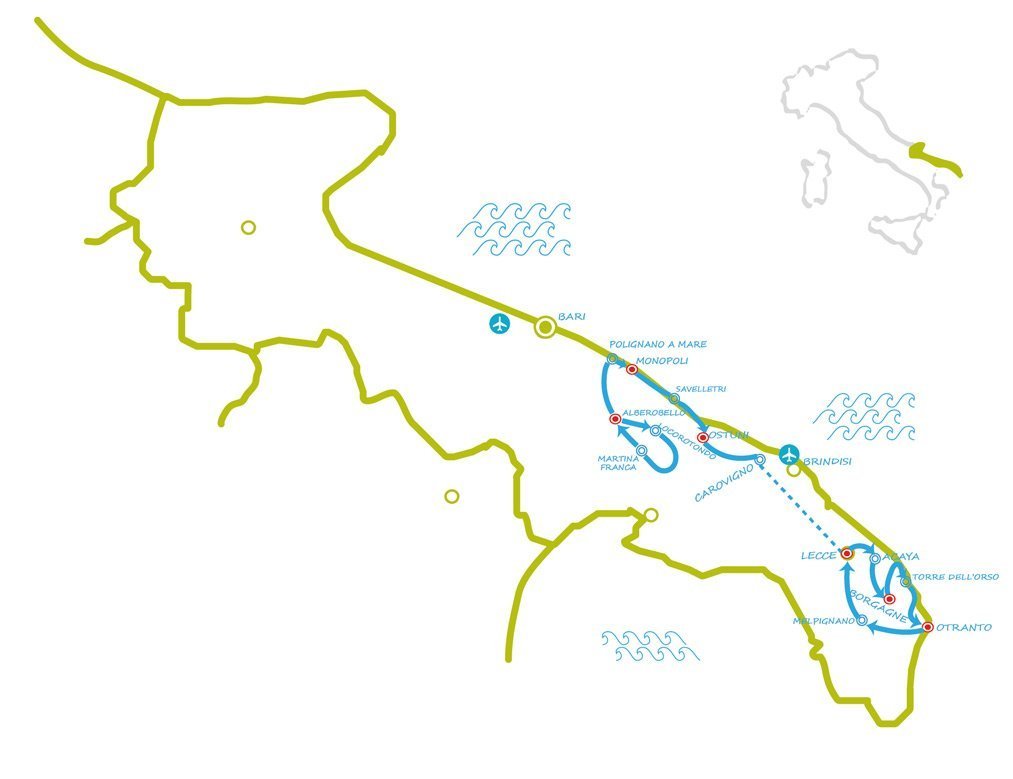 Arrival in Alberobello and check-in.
Welcome briefing and bike fit with a member of Puglia Cycle Tours crew.

It’s time to say goodbye to the lovely Alberobello and its trulli! You slowly ride down to the Adriatic coast and reach one of its most fascinating town: Polignano a Mare, perched on the side of a cliff; explore the old town and reach one of the terraces, with their stunning view overlookig the sea. Riding further on the coast, you get to Monopoli, a perfect mix between beautiful sea and history. Your accommodation is in the old town, a few steps away from the old fishermen port and the Castle.f

*July and August on request

Helmet is always included in the bike rental.

We have selected for you the best boutique guest houses or 4-5 star hotels (depending on availability), bike-friendly accommodations in Puglia, equipped with all the comforts a bicycle traveller may need.

[actual accommodation could vary based on availability]

On request and upon availability we can upgrade accommodation options.

The average daily path is between about 40 and 50 kilometres.

Alberobello is easily connected with Bari airport. A metro and several shuttles (but also trains, taxi and hire cabs) let you get to Bari central train station in a few minutes. Here you can take one of the many daily trains of the Ferrovie Sud Est, (F.S.E.) to Alberobello. The same is the case for Bari port, located a few steps away from the Central Station.
Alberobello is also 80 km far from Brindisi, where you can find both an airport and a port with several international routes, too.
If you are travelling by car, take the Bologna-Taranto highway until you get to the exit “Gioia del Colle”. Then take the SS 117 to Santeramo and keep driving on the SS604  towards Alberobello. Coming from Brindisi or Taranto, take the SS16 towards Locorotondo until you get the exit “Alberobello”.
Anyway, a private transfer service with driver from all Apulian airports, stations and ports is also available on request.

Customers have one of our assistants at their disposal 24 hours a day, in case of any problem or need.
In the event of a bicycle failure, he/she will sort the problem out or suggest how to.
On the day of arrival, the guests meet our assistant for a welcome briefing and bike fit, during which he supplies them with the equipment (maps, GPS device, etc.), giving useful information about the route and the working of the GPS.

Fill out the following form to BOOK Giro di Puglia 8 days | Alberobello – Lecce.
This will be followed by an email confirming your booking.