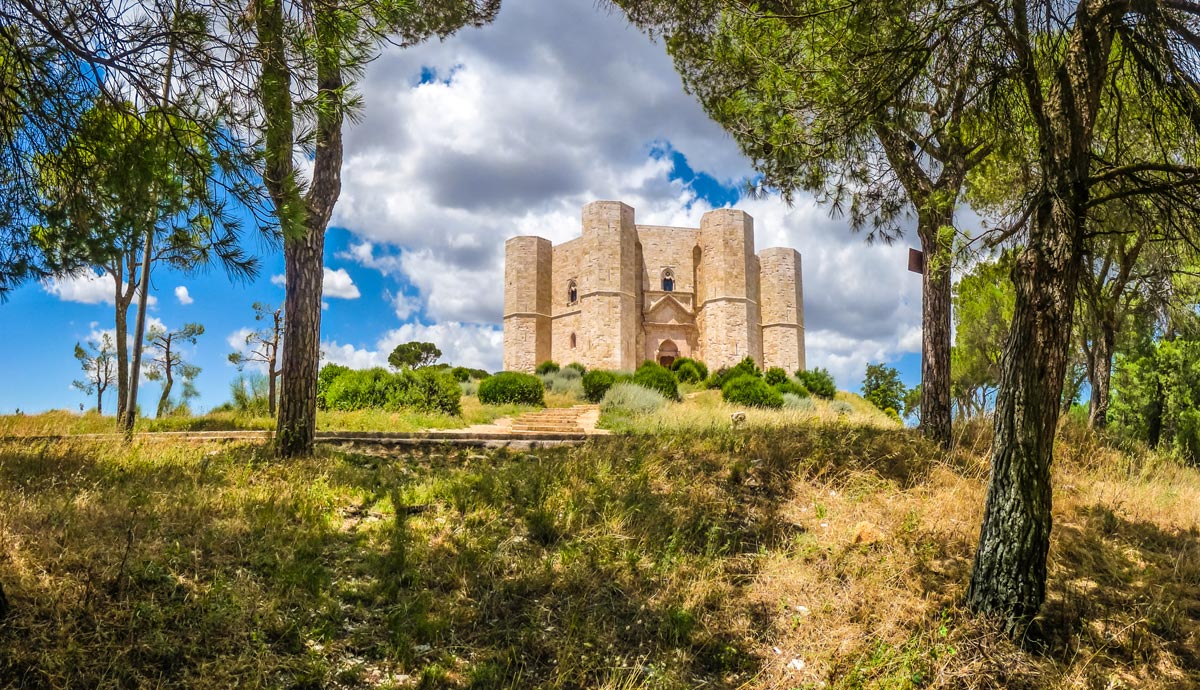 After sharing with you the 7 must-see places to visit in Puglia, we are enthusiastic to present you a list of our regional Unesco sites.
Unesco World Heritage sites are more than just charming places with an additional value. Being awarded the title of Unesco also encourages the preservation of these unique and timeless treasures.
Among the Italian World Heritage List, Puglia boasts 4 masterpiece sites, 3 cultural and 1 natural.

Located between Andria and Corato countryside, this UNESCO site is a few kilometers away from Bari. Built by the Emperor Frederick II in the 13th century, Castel del Monte is mainly a symbol of medieval military architecture. Perfectly preserved, it will enchant you with its peculiar details such as the rigour of its plan and form, and the eclecticism of its cultural elements. This Castle is a perfectly octagonal building that has a tower of equal shape at each corner, whose measurements are linked to hidden meanings still under investigation, and whose purpose is still unclear. Its position is neither strategic nor suitable for a fortress. It was therefore hypothesized that it was a kind of temple. Many scholars have found astronomical symbols inside. If you visit the Castel del Monte fortress, you will actually start a journey into mystery.

2) The Trulli of Alberobello

Alberobello is a fairytale UNESCO World Heritage town, made of 1500 Trulli that are typical Puglia conical stone huts. It is considered a unique and enchanting place to visit. Most of the Trulli here have turned into souvenir shops, cafes, restaurants, but some of them – in less crowded areas of the town – are real homes where people still live.
Wordly appreciated for their exceptional forms, Trulli are prehistoric buildings characterized by circular plants, white dry stone walls, small windows and spectacular pinnacles. This famous heritage site, very close to Bari, creates a whole urban area. While the trulli architectural style dates back to prehistory, many believe that the passion for more modern trulli constructions, developed as an early and sophisticated means of tax avoidance. During the middle ages, landlords used to instruct the farmers to build the dry stone roofs of the trulli with a removable keystone in the middle and the walls without mortar. When the tax inspectors appeared, the farmers would pull the keystone out, collapsing the building – thus allowing the landowners to avoid paying any taxes. This is what some would describe as an enduring Italian tradition! 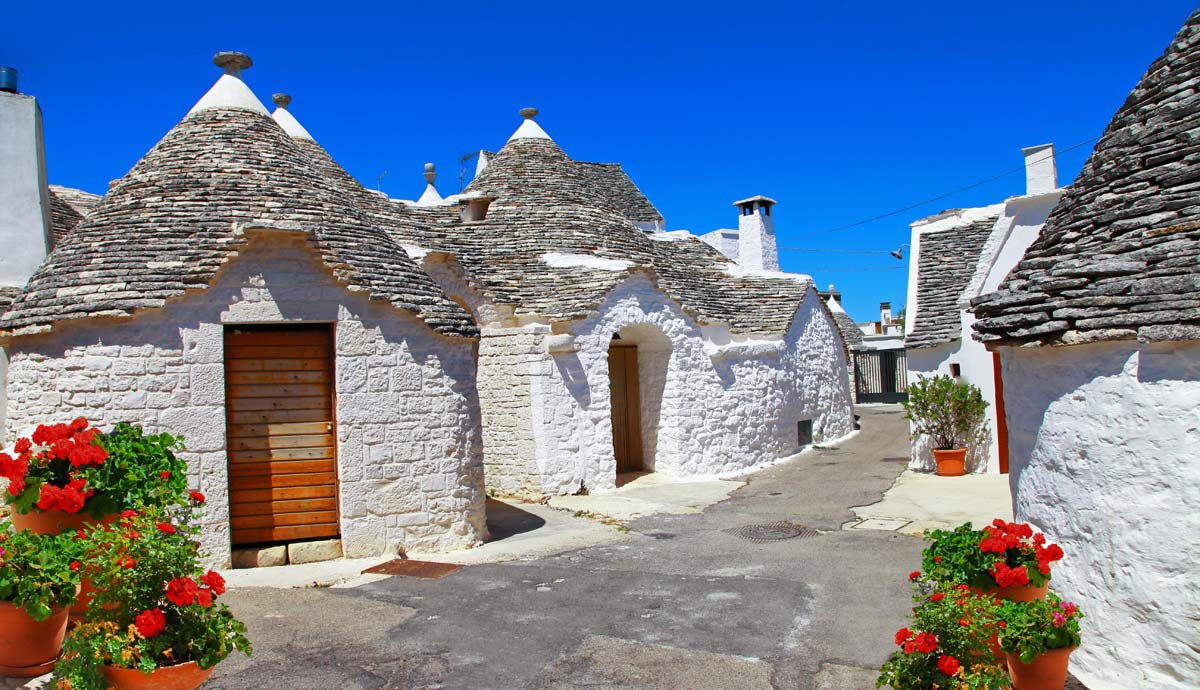 3) The Sanctuary of San Michele Arcangelo

The Sanctuary of San Michele Arcangelo, a UNESCO World Heritage Site since June 2011, is located in the heart of Monte Sant’Angelo in the province of Foggia, 150 km away from Bari. Built in 490 AD, it fell under the dominion of the Lombards in 650 AD, who transformed it into the main worship center of the West. You can find more information on the page dedicated to the Sanctuary of San Michele Arcangelo.
One of the world’s most celebrated holy places, dedicated to the Archangel Michael, stands on a high ground, on what was once the Via Sacra Langobardorum. Gargano’s typically verdant and inaccessible countryside lies all around. The Sanctuary’s white façade welcomes pilgrims with its two large arches, surmounted by a niche with a statue of Saint Michael.
From the vestibule, a 86-step staircase leads down to the heart of the sanctuary, the Sacred Cave where Saint Michael appeared. Here, you can read an inscription of the Archangel’s words, which consecrated this mystical place over the centuries: “There where the rock opens wide, the sins of men shall be forgiven.”
The baroque altars of the Holy Sacrament and Virgin Mary stand near the magnificent main altar which is dominated by a marble statue of the Prince of the celestial militias.

Visitors will find this area in the National Gargano Park; it stretches over about 400 hectares at a height of 800m above sea level. The Zappino dello Scorzone, an Aleppo pine with more than 700 years, stands here among the largest and most ancient trees of Italy. Visitors will find many yew trees in the reserve forest, whose wood was used in the past to make bows.
As regards mammals, the area is home to wolves, hares, squirrels, deer, foxes, badgers, wild cats, small rodents, boars, roe deer and weasels.
If you are a birdwatcher lover, don’t miss the chance to observe crows, magpies, blackcaps, nightingales, robins, woodpeckers, sparrowhawks, kites, goshawks, buzzards and blackbirds by day. At night, the great owl appears, together with the tawny owl, and the barn owl.

5) The Sassi and the Park of Rupestrian Churches

Not so far from Bari, the Sassi and its park are precisely located in Matera, in the Basilicata Region. The Sassi – meaning stones – of Matera are described as troglodyte settlement, carved out of the rock. They have been the hidden heart of ancient pastoral communities for more than two millennia. The Sassi gained the title of Unesco site because they show the evolution of a culture, and because they offer visitors a historic atmosphere and breathtaking sceneries. Once the “shame of Italy,” the ancient warren of Matera natural caves may represent now the most dramatic history of rebirth in Europe.

Christmas is in the air! 🎄 In December, Locoro

The last stage of the Bike&Wine Tour was a "medita

Today cycling from the Ionian coast to the heart o

With the sunshine and the wines of the Valle d’I