Search
You are here Home / Discover Puglia / What to see in Matera: discovering the city of Sassi 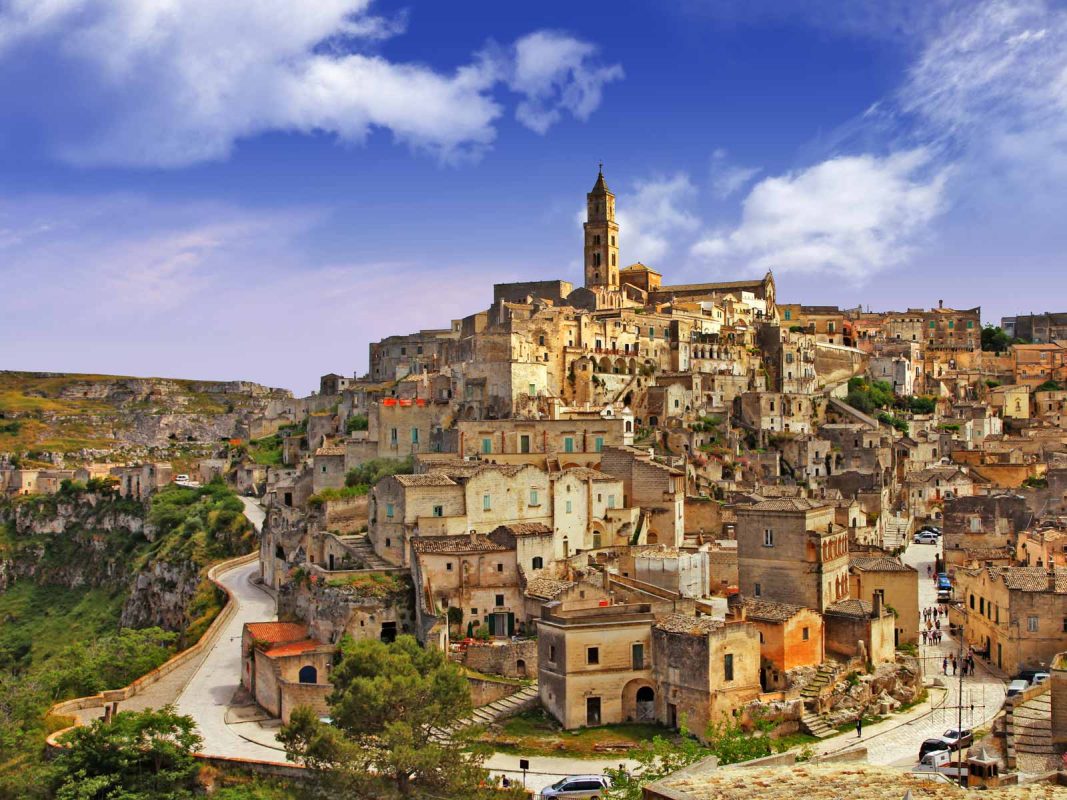 Yesterday “national infamy”, “Italy’s shame”; today UNESCO City Heritage and European Capital of Culture 2019. Matera, which in the words of authors and politicians (the ones mentioned are respectively Alcide De Gasperi and Palmiro Togliatti) was elected as a symbol of the backwardness of the South due to the painful  health conditions in which its inhabitants lived, it has become one of the most popular tourist destinations in recent year. In fact, starting from the post-war period Matera, it was the object of intense urban redevelopment whose first consequence was the forced abandonment of the historic center and its famous Sassi. But thanks to the foresight of associations and citizens, from the Seventies Matera has returned to be populated and its typical houses are still today the result of a conservative recovery operation capable of bringing to light all the charm of a unique city in the world. If you want to learn more, let’s find out what to see in Matera and how to  enjoy the visit of this pearl.

Where is Matera and how to get there

First, a bit of geography: where is Matera? And how can you reach it? Matera is a small town in Basilicata, located on a rocky promontory very close to the border with Puglia: in fact it is only 20 kilometers from Altamura, the homeland of the Apulian bread par excellence, and only 60 kilometers from Bari. It is advisable to stop in Bari if you intend to visit Matera. The city of Lucania is not in fact served by the Ferrovie dello Stato, but is connected to the Apulian capital by the F.A.L railway service (Ferrovie Appulo Lucane) which makes it easily accessible even for those arriving by plane in Bari. There is no shortage of connections on wheels: there are many bus companies that take you to Matera from Bari or Potenza. If you have a car, all you have to do is follow the road directions according to the direction you are coming from: the historic center can only be visited on foot, but it will not be difficult to leave the car just outside the center or in one of the guarded parking lots.

What to see in Matera

Once in Matera, all you have to do is start the city tour. If you have a few extra days, we recommend you just one thing: getting lost in the maze of narrow streets, climbs and descents that make up the heart of the historic center and finding unexpected corners and lookouts, it’s an integral part of the travel experience. For those who prefer to know exactly what to do, we have summarized the main attractions of Matera, starting with the proverbial Sassi.

The Sassi of Matera: what they are and how to visit them

The Sassi of Matera take their name of their conformation: dug into the friable rock typical of the place, the Sassi are the ancient cavernous villages located between the “Murge” plateau and the “Gravina” stream, where the local population lived, for centuries, along with his cattle. These are real cave houses created inside the stone, where even very numerous families lived in conditions of extreme poverty. A widespread system of channels assured the supply of rainwater and spring water, while inside the caves the only room served as a bedroom (often with only one bed for all the members of the family), for the kitchen (the hearth) and towels (a simple chamber pot). The Sasso Barisano and the Sasso Caveoso are the two “neighborhoods” that surround the central nucleus of the Civita, the historic city whose first settlement seems to date back to the prehistoric age.

The Sasso Barisano, in particular, is located north-west of the Civita and can be accessed from both Piazza Vittorio Veneto and Via D’Addozio. Both paths enjoy breathtaking views and will take you to the monastery of S. Agostino, built in 1591 overlooking the “gravine”. From here, in addition to the river and the surrounding valley, you can also admire the view of the Sasso Barisano that climbs up the rocky side of the plateau. Continuing along via Fiorentini, there are also several typical houses, some of which can be visited, and two other monastic complexes: the church of San Pietro Barisano and the rock church of Madonna delle Virtù.

It’s possible to reach Sasso Caveoso always starting from Piazza Vittorio Veneto: from here it will be enough to take Via del Corso, continuing on Via Ridola until you reach the steps that allow you to immerse yourself in the stretch of narrow streets and houses. What to see in Sasso Caveoso? First of all, the church of “Santa Lucia delle Malve” with its Neighborhood and above all with its unforgettable viewpoint on the Gravina. Secondly, the church of the “Madonna delle Idris”, a real unicum in the Italian architectural panorama and not only, since the construction is carved into the cliff – Mount Errone – which dominates the Sasso. Striking on the outside, also due to the raised position from which you can enjoy a splendid view of the white, gray and green landscape of the city. Complete the visit to the Sasso, the square of San Pietro Caveoso, with its church and the local craft shops. The walking tour continues towards the Civita.

La Civita and the view of the Sassi

Symbol of the Civita, the complex of buildings that rises between the two Sassi anciently protected by walls, is certainly the Duomo. Reopened after a long restoration that lasted about 13 years, the Duomo stands on the historic center and fascinates tourists and pilgrims with its 16-spoke rose window and its bell tower more than 50 meters high. This is the most modern area of ​​Matera where it will be easy to meet ice cream parlors and craft shops. But there is no lack of historic buildings and panoramic views, indeed: what you must see are the Palazzo del Sedile with its small square and the seventeenth-century Palazzo Lanfranchi, home of the Museum of Medieval and Modern Art of Basilicata. Here we suggest you a stop to admire the view of Piazzetta Pascoli, with its balcony suspended over the Sasso Caveoso, which represents one of the most surprising faces.

Where to eat in Matera

After so much walking, a well-deserved break to reinvigorate body and soul, right? Deciding where to eat in Matera will not be a simple undertaking: with the rebirth of tourism, the restaurant proposals have definitely increased in every area of ​​the city and today there is an high-level selection. There are many restaurants, for example, in the Sassi, often restored with an eye to modernity. Among the typical dishes of the Lucanian gastronomy, similar but different from the Apulian cuisine, are certainly the bread of Matera, the black chickpeas and the red aubergines, the cheeses like “cacioricotta” and “caciocavallo podolico”, sausages and lucanica sausage, often enriched with fennel and pepper. The best way to enjoy all the original flavors is to rely on those who know this city well.

And, needless to say, we at Puglia Cycle Tour are perfect for this! Why not start from Matera for a guided bike tour to discover the Basilicata and Apulian lands?